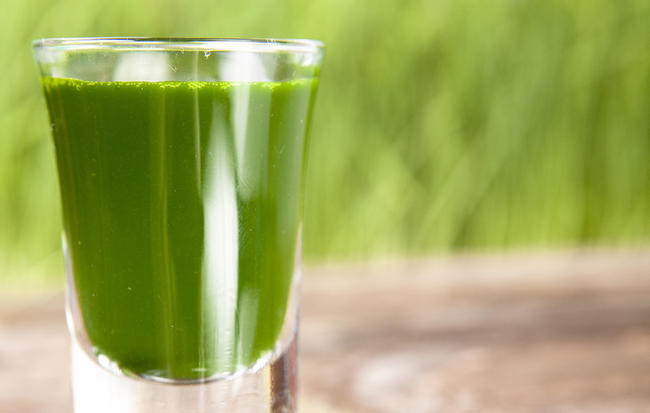 If you frequent juice shops or flip through celebrity gossip magazines, you’ve likely heard of wheatgrass, a juice made from young grass blades. Everyone from Angelina Jolie to Ansel Elgort is reportedly throwing back shots of the chlorophyll-rich liquid, which is said to reduce blood glucose levels, give skin a radiant glow, and aid weight loss. (Got 10 minutes? Then you’ve got time to lose the weight for good with Prevention’s new 10-minute workouts and 10-minute meals. Get Fit in 10: Slim and Strong for Life now!)

While it would be fantastic to undo the effects of fried food and general slothfulness with a daily shot of green juice (OMG, so fantastic), the idea of a super-powered green potion sounds too good to be true. But scientists aren’t exactly calling foul. Then again, they don’t really know enough to have an official stance on the stuff, either, says Shereen Lehman, MS, adjunct faculty member at the University of Bridgeport Human Nutrition Institute. “There are few human studies on the benefits of wheatgrass, and scientists have yet to figure out if humans can benefit and how much they’d need to consume for better health.”

The official verdict may still be out, but there are enough devoted fans out there to make me want to try it for myself. (I mean, just look at Angelina’s skin!) Here’s what happened when I took a wheatgrass shot every morning for two weeks:

I severely underestimated how gross it was.

I opted for organic wheat grass powder ($22, amazon.com) because it was far cheaper than forking over $4 for a single shot at my local juice bar. It was also far easier than juicing fresh wheatgrass myself.

In its dried form, wheatgrass looks a lot like green sand. Mixed with water and vigorously stirred, it’s even worse. It looks like the inside of a lawnmower bag and tastes like how a compost pile smells. I gagged drinking it. By day two, I developed a new technique. I huffed out a few breaths before knocking it back and tried not to breathe as I choked it down. It seemed to work; at least I couldn’t really taste it.

I was really, really hungry.

OK, so I should tell you that I decided my daily wheatgrass shot would be my breakfast. Don’t ask me why I did this when I easily could have downed it along with my usual peanut butter-topped apple. I guess I thought that having wheatgrass on an empty stomach would be the best way to feel the effects. But I have to admit, I’ve made better decisions in my life. (Start your morning off right with one of these 5ridiculously easy juicing recipes.)

While a wheatgrass shot has about 20 calories, my usual breakfast has around 200 calories. I was expecting to be hungry, but the surprise was that I wasn’t hungry right off the bat. Instead, it was a delayed hunger that still left me ravenous by lunchtime, which means that I probably ate more during the rest of the day, without even noticing it. Not exactly a recipe for weight loss.

When I asked about my approach after the fact, diet pros agreed that I should have continued eating breakfast: “Eating something like oatmeal and yogurt would be a better breakfast than just drinking wheatgrass,” Lehman said. Isabel Smith, RD, founder of Isabel Smith Nutrition, agreed: “A wheatgrass shot isn’t calorie-dense enough to count as a meal replacement. It would have been better to drink it in addition to a meal.”

7 Health Mistakes You Make Every Weekend

Here's how you can stay on your game. Monday through Thursday, you’re a total ninja…

Because you can't live purely on hamburgers. Sure, you might pump iron at the gym.…

I know how it is; a morning just doesn't feel right without that cup of…